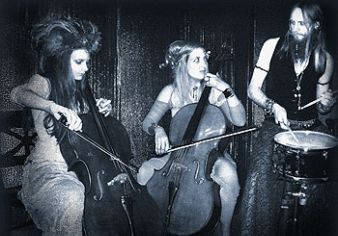 How's it going my gumdrops? As you already know, tomorrow is Valentine's Day. This is that time of winter, when most American men in today's society DREAD the holiday.

If you do NOT have any Valentine's Day plans, I suggest treating yourself to something nice and avoiding stalkbook like it's the Zika Virus tomorrow, if possible.

With tomorrow being Valentine's Day and if you happen to be in a Cello Rock mood today, you're in luck. I have 3 songs from the Cello Rock group, Rasputina.

Rasputina is an American Cello Rock band from New York, that has been around, since 1989.

The band released their debut album, Thanks For The Ether in 1996. Most people are unfamiliar with Rasputina, even though the group has collaborated and gone on tours with Nirvana, Marilyn Manson, Twiggy Ramirez, and Siouxsie Sioux from Siouxsie And The Banshees/The Creatures. This is in addition to being featured on soundtracks, over the last 2 decades.

Rasputina's song played, during a scene in Buffy The Vampire Slayer's "Surprise" (Season 2: Episode 13). If you were a Buffy fan during the late 1990's, you may remember everyone celebrating Buffy's 17th birthday. Meanwhile, Drusilla was dancing to "Transylvanian Concubine."

At the time, I never heard of Rasputina. They weren't a group that was heavily played on MTV or radio stations. However, Rasputina was featured on Buffy The Vampire Slayer: The Album.

I cannot help saying how much I enjoyed frequently buying soundtracks, during my adolescence. Even though I never bought that soundtrack (I had no idea it existed, until I became a dj), soundtracks were and still are the best ways to learn about undiscovered musical talent, especially in today's music industry.

By the early 21st Century most specifically 2004, most entertainers became sell outs by focusing on oppressing everyone with their "political views." With that being the case, I lost interest in most entertainment. It was to the extent that I no longer wanted to host my own radio show anymore.

After graduating from college 10 years ago, I no longer listen to ANY radio stations unless I'm the car. That should say something to everybody. Anytime a former radio show hostess/dj quit radio because musicians became pretentious political sell outs with their need to convert everyone with their political views and overall stupidity, that should be a major clue.

Aside from those issues, trying to upload Rasputina's "Hunter's Kiss" and "If Your Kisses Can't Hold The Man You Love" cover were complicated. Therefore, you must click on the links below, in order to listen to those songs.

Because there is very little knowledge about Rasputina, their music is scarce around cyber space. Anyway, here is Rasputina for today's Song Saturday.

1) Rasputina "Transylvanian Concubine" Thanks For The Ether (1996), Buffy The Vampire Slayer: The Album (1999)

Reply [email protected]
9:23 AM on February 13, 2016
Cellos are real good for rock especially if you use phase shifters on them.