How's it going my gumdrops? Did you enjoy yesterday's Song Saturday blog about The Cure and about being Goth in general? As promised in that same blog, I said I would mention the forum I joined earlier this month.

Now that Adult Swim's message board is shut down (finally), I joined Animeleague. For all you Anime fans, Animeleague is a serious breath of fresh air and is the polar opposite of Adult Swim. When I say "polar opposite," I mean PLEASANT.

Throughout the last 3 years, you have read my rants about the network itself and the overall Adult Swim Community. Had I known that Animeleague existed 3 years ago, I would've joined that forum MUCH SOONER and would've NEVER joined Adult Swim.

I definitely regret joining Adult Swim's forum and allowing a misogynistic, sleazebag, con artist to guilt trip me into staying ONLY to use me as a means to an end and to smear my reputation out of spite.

Even though there were SOME decent posters on ASMB, I can't help saying good bye and good riddance to such a deplorable and extremely toxic community mostly moderated by crooked man-children with Little Dick Syndrome.

The social environment on Animeleague is really nice and welcoming of new posters so much so that there is a welcome committee and you are automatically assigned a buddy, after joining. Also, the moderators are very active and go above and beyond to make the forum as pleasant as possible for everyone.

I haven't had a single fight or witnessed a fight, since joining. This says A LOT about Animeleague's community.

In addition, there are numerous sub-forums on Animeleague about Anime, along with other types of entertainment and sub-cultures. This brings us back to yesterday's blog about the Goth Sub-culture.

Yesterday, you may recall, that I explained about Goths and the sub-culture on here and on Animeleague. For today's Cartoon Sunday, let's revisit the topic of being Goth.

In the illustratiion above, we have Yuko Ichihara. The characters in the Seinen Supernatural Horror Comedy Anime, xxxHolic have freaky illustrations.

The characters normally have long, spaghetti legs like Jack Skellington from The Nightmare Before Christmas.

Like I explained last year, Yuko Ichihara is a powerful witch, who owns a shop and grants people their wishes. I believe Yuko is more like a cunning and opportunistic genie.

Most of her jobs consist of dealing with supernatural beings. In case you haven't already, I suggest clicking on the link above Yuko's picture.

Next, we have Creepy Susie. 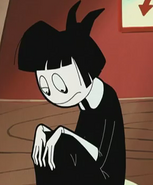 Some of you may remember Angus Oblong's shortly lived cartoon, The Oblongs from The WB. Creepy Susie is supposedly a 10-year-old character from the series.

Most people don't know that The Oblongs was based on Creepy Susie And 13 Other Tragic Tales For Troubled Children. This was a 1999 collection of illustrated short stories written by Angus Oblong.

This young, creepy, Goth Valley Girl is obsessed with death, was born on Halloween, and can tell an animal's gender by the taste of its blood.

On the other hand, there is Germaine Endez. As far as Germaine goes, she has been restyled a plethora of times throughout the decade. This character has been illustrated as fat, skinny, busty, flat-chested, constantly changes hair styles, etc.

Germaine is a struggling poet/writer desperately seeking to be published and works unstable jobs. At the same time, she has an identity crisis and Foamy The Squirrel helps to keep her grounded.

Meanwhile, here are some other Goth female characters, that have been shown in other Anime besides xxxHolic. There is my long-time favorite, Sunako Nakahara. Despite the fact this homely recluse fears "beautiful people" (mostly attracive men), I love Sunako Nakahara. Sunako is a creepy Goth female character I can identify with on many levels. She loves sitting in her bedroom and watching Horror movies ALONE. Sunako is also self-sufficient around the house.

I wanted to share an image of the "Goth-Loli Sisters" from The Wallflower, but had no luck finding a decent image in a small size. However, the Goth-Loli Sisters from this Shojo Horror Comedy are not the only Gothic Lolita Anime characters in existence.

In substitution of the Goth-Loli Sisters from The Wallflower, there is Hildegarde from the Shonen Supernatural Action Comedy Anime, Beelzebub.

Hildegarde is the main female protagonist in Beelzebub. She is a Demon Maid, who acts as the adoptive mother and nurse of Beelzebub IV. "Baby Beel" is the son of Beelzebub III and Iris and was sent to the Human World.

It has been a few years, since I last watched this series. Too bad there wasn't another season of Beelzebub.

Last, but surely not the least of an acknowledgement is Saki Hanajima. I have always loved this Fruits Basket character. I can't decide which character is creepier, Saki or her younger brother, Megumi. They both have psychic abilities.

When Saki Hanajima is not wearing her high school uniform, she normally wears a black cloak or a veil with her black dresses. I will NEVER forget that scene of her gothing up The Sohmas urinal for New Year's Eve.

Staring at the appalled expression on Shigure Sohma's face was hilarious. Anyway, if you would like to learn more about Goth chicks in animation, check out WatchMojo's choices for Top 10 Animated Goth Girls below.

Reply Fantastic Kitty
3:24 AM on January 24, 2017
I love this entry!! Us goths are so often overlooked!! One VERY popular goth character is actually in a live action TV show. Abby, the forensic scientist in NCIS is proably one of the best representations of goths in TV.
I love that you've highlighted goths in animation that normally people don't think of as goth. There's a ton of them!

Reply Anna H.
3:35 AM on January 24, 2017
Yes, I know exactly what you mean. There's actually online listings of Goth Anime characters, which I found shocking. There's so many Goth characters in animation and entertainment in general that it's insane.