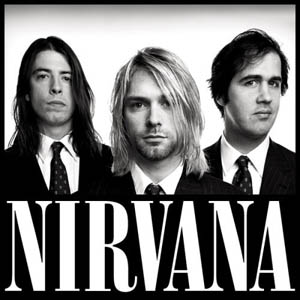 How's it going my gumdrops? Today is not only Song Saturday, but also the day of 2 tragic deaths. April 5, 1994 Kurt Cobain from Nirvana committed suicide and Layne Staley from Alice In Chains died from a Heroin/Cocaine overdose April 5, 2002. It is depressing yet strange.

Both of these '90s Grunge vocalists from Seattle, WA happened to die 8 years apart from each other on April 5th. If memory serves me right, I believe Kurt and Layne were both friends.

Like I said a few Song Saturdays ago, the mainstream media LOVES to make a bigger production about Nirvana and Kurt Cobain's death than about Layne Staley's because Nirvana paved the way for so many Alternative bands/artists, especially for Grunge bands such as Alice In Chains.

I won't focus too much on Layne's death this Saturday. I plan on discussing his death, next week.

Returning to Kurt Cobain, I remember the exact date 20 years ago, when his suicide hit the airwaves. The news announced Kurt's suicide on a Good Friday, which was on April 8, 1994. I was only 2 months from turning 12 years old. I was in shock. One of our local Rock radio stations in Milwaukee, WI (at the time) did a Nirvana tribute.

Dave Grohl's voice was broadcasted on the radio discussing Kurt's suicide and about Nirvana wanting to disband. I may have only been in my "tweens," but it was a very surreal and in tense moment. Even MTV's news anchor, Kurt Loder announced, that Kurt Cobain committed suicide.

20 years ago, I never really heard about musicians committing suicide, until I reached puberty. Had I been a little older, would Kurt Cobain's suicide had a bigger impact on me as a fan? I was a Nirvana fan but I wasn't an extremist.

Right after his death, there were some Nirvana fans committing suicide because they viewed Kurt Cobain as their "God." This was something he never wanted. Kurt Cobain really hated the fact, that he and Nirvana became famous.

Throughout these last 2 decades, I watched some Nirvana documentaries. Over the most recent years, I read and heard, that Kurt hated the way Nirvana fans and the media misinterpreted their music. That's not including music critics over analyzing Nirvana's songs.

Honestly, it wasn't until I had my own TV with closed captioning on it, that I was able to understand what Kurt Cobain said in Nirvana's lyrics. That was 2 years after his suicide.

My mother wouldn't allow me to buy any Nirvana albums yet I could buy a Megadeth or Metallica album.

Kurt was NOT the most articulate vocalist. After Nirvana became famous and before Kurt's suicide, I saw parodies about the band. Weird Al, for example, did a parody of Nirvana's "Smells Like Teen Spirit." He joked about Kurt not knowing what he was saying in his lyrics.

This was besides Kurt having a rough time coping with his parents divorcing, being bullied by his peers over it, and witnessing his mom's boyfriend inflicting domestic abuse upon her.

To make matters worse, Kurt Cobain became withdrawn, defiant, transported from house to house, having foster parents converting him into being a devout Christian, and renouncing Christianity to follow Buddhist and Jainist philosophies.

Cobain began abusing drugs, when he was 13 years old. He had stopped for a while. Then, he really started abusing drugs as an adult. This was epecially when Nirvana reached its pinnacle. What I find the most interesting is the Butthole Surfers connection.

I'm not necessarily bringing this particular band up to purposely blame them for Kurt Cobain's addiction. However, this is the 2nd time, I have read about a vocalist from a famous Alternative/Grunge band having connections with this specific band.

About a few months ago, I read about Stone Temple Pilots' Scott Weiland touring with Butthole Surfers. Years ago, they introduced Scott to Heroin. When I read more about Kurt Cobain, he and Courtney Love met at an L7 and Butthole Surfers tour.

Granted, Kurt Cobain was already exposed to Heroin in 1986 by a local drug dealer in Tacoma, WA. Supposedly, Kurt used Heroin to self-medicate his stomach pain and by the end of 1990, he developed a hardcore addiction to it.

Looking back at some of Nirvana's past interviews, live concert performances, and music videos, Cobain's Heroin Addiction seriously destroyed him, his performances, relationships, and Nirvana overall. Sometimes, when I watched Kurt's interviews 2 decades ago, he seemed somewhat sober, while smoking his cigarette.

Then, there were times when he physically looked, sounded, and acted really high. Learning more about Kurt Cobain's background yesterday, really makes me believe, that he committed suicide.

Most had speculated that Courtney Love either killed Kurt Cobain, or set him up to be killed, 20 years ago. Her band, Hole became famous shortly after his death. Courtney Love is known for dating other famous musicians and actors, having a violent temper towards men (not that Kurt didn't himself), constantly being in and out of drug rehab, etc.

That reminds me, when I originally heard the news about Kurt Cobain's death on the radio, DJ's claimed an electrician found him with a suicide note, his clothes placed in the bathroom, and was lying naked with a gun to his head.

Two weeks ago, New York Daily News released photos of Kurt and Courtney's previous apartment, drug paraphernalia, and his corpse. What I heard about his death 20 years ago and the actual photo of his corpse, don't seem to match. 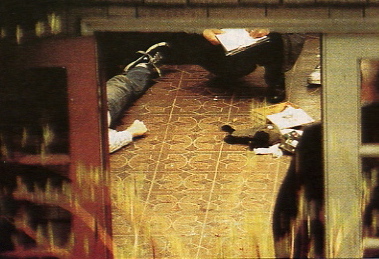 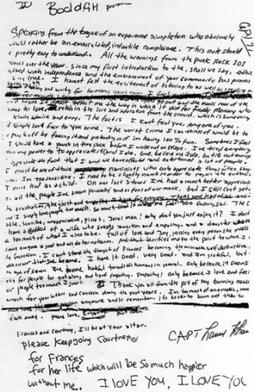 Last month, the Seattle Police Department reopened Kurt Cobain's case. According to the police, they received at least 1 weekly request, mostly via Twitter to reopen his suicide case.

After re-investigating Cobain's report, the Seattle Police Department reclosed it. There wasn't much to their discovery. It's rather convenient, that they chose to reopen this investigation.

This Thursday, April 10th, Nirvana will be inducted into the Rock and Roll Hall of Fame.

"Breed" and "Drain You" are 2 of my favorite Nirvana songs. Several years ago, Otep did a cover of Nirvana's song "Breed." With all that I've said, this Song Saturday, I've posted these 2 Nirvana Classics, which can be heard on their Nevermind album.

Reply Jesse
3:26 PM on April 5, 2014
You mentioned something about Weird Al doing a parody of "Smells like teen spirit" Here is the Christian parody of the song: http://youtu.be/pBrEKHFH0nk

Reply Anna H.
6:39 PM on April 5, 2014
Hi Jesse! Sorry I didn't respond sooner. On my end of Webs, I've been experiencing some technical difficulties, which is abnormal for me. Every time I send e-mail notifications today, they all bounce back to me. However, I did receive your comment.

Reply vickiecollins
12:09 AM on April 6, 2014
good history here, I cant say I was or am a kurt Cobain fan, but his sucide or whatever it was sure had an impact all over.

Reply Jesse
12:20 AM on April 6, 2014
Hi Anna! Don't worry about it. Sometimes I spend hours being off facebook before I'm back on again. I'm glad you received my comment

Reply Anna H.
2:45 AM on April 6, 2014
Oh, you have no idea. LOL! It was crazy 20 years ago. They even had some suicidal Nirvana fans on 1 of the talk shows, right after Kurt Cobain's suicide. Then again, growing up in the 90's was a very angsty time. That was before, during, and after Nirvana was famous and Kurt committing suicide. The Rock Industry at the time began declaring, that "Grunge was dead." It really isn't. The most popular Grunge bands have returned with more albums over these last few years. Not only that, but also today's younger generations have turned to older music from 1-5 decades ago because their generation of music is really terrible. LOL!