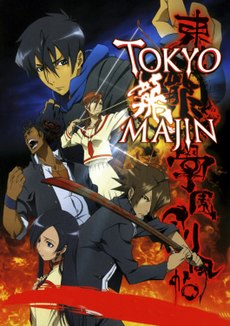 How's it going my gumdrops? I meant to post this 2 weeks ago but as usual, a lot has been happening both on and offline. After our Dish Network boxes and satellite dish were upgraded, I discovered that Chiller TV began re-airing Horror and Supernatural Action Anime.

If you have either Direct TV, or Dish Network as your provider, Chiller TV now has the Anime Wednesday block. The network is currently airing English dubbed shows from Funimation Entertainment. Anime News Network and Chiller TV both published their articles about the schedule.

Out of Chiller TV's current Anime Wednesday block, I watched Black Blood Brothers, Devil May Cry, and Is This A Zombie? online years ago. However, Tokyo Majin was a show I never had the chance to watch, until recently.

Over the last 2 years on Xanga 1.0 and It's Not All Gumdrops & Unicorns, I mentioned that Adult Swim should have acquired Devil May Cry. It appears that Chiller TV beat Adult Swim to the punch. Chiller TV's Anime Wednesday block appears to be a hot topic on Adult Swim.

Some Adult Swim posters are currently insulting Chiller TV's block. Their criticism is somewhat necessary. I have to agree with some posters. Devil May Cry needs to be the opening Anime Wednesday show. It is the most popular out of the 4 titles.

At the same time, I am somewhat annoyed by them complaining about Black Blood Brothers and Is This A Zombie? being aired. Granted, Is This A Zombie? is more of a Supernatural Comedy, but at least Chiller TV's trying to expose Horror fans to other Anime genres and sub-genres. Most people lack knowledge about Anime.

There is much more to Japanese animation than Shonen Jump Action Anime titles. Everybody doesn't know about Anime except for most casual Cartoon Network and Adult Swim viewers from over the last 10-20 years. Although, Anime Otakus know more than them hands down.

Anime existed before, during, and after Cartoon Network, Toonami, and Adult Swim were launched. Younger Gen Xers and older Millennials were watching Anime long before the existence of most of today's cable and satellite networks.

I cannot help feeling annoyed, whenever I have to deal with Anime fans, that consider Cartoon Network's Toonami and Adult Swim to be their so-called "Gateway To Anime." Many 20-something-year-old viewers act as if Cartoon Network and Adult Swim are their Bibles and think they know everything about Anime.

Yes, the Toonami block on Cartoon Network helped "pave the way" for most American Anime viewers years ago. At the same time, those same viewers were only exposed to Action Anime. There is more to Anime than Action yet Action is supposedly what sells better to the male American Anime audience.

Within the last decade, younger Anime fans had and still have access to more Anime genres and sub-genres via the Internet than us older Anime fans ever had growing up.

During the '80s and '90s, us 30 and 40-something-year-olds rented and bought Anime from local video stores like Blockbuster Video. Otherwise, we shopped at Japanese stores that sold imported goods or get bootleg versions of Anime.

I hate sounding like an old lady, but today's younger generations have it made.

Since today's blog is mostly about Chiller TV's Anime Wednesday block and because everyone does NOT have Chiller TV, it is only fair to share at least 1 of its shows. Here is Tokyo Majin for today's Cartoon Sunday.

Reply [email protected]
1:37 PM on July 26, 2015
Tried to watch but couldn't, some kind of date of birth bullshit going on that didn't go back far enough for me.

Sometimes you have to reload your Hulu video, in order to make it work. Thank God I never wasted money paying to watch Hulu's videos. Well, at least you were ever to watch Tokyo Majin.

Aside from that, how do you like the latest scenery? I just changed it earlier this morning.

Reply Anna H.
10:56 PM on September 9, 2015
A lot of us were pissed because Chiller TV canceled its Anime Wednesday block after 3 weeks. Normally, Chiller doesn't flake out on its programming.