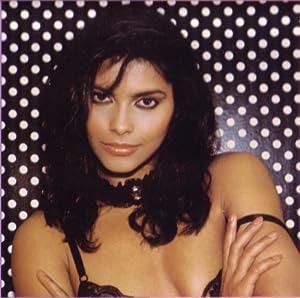 This is not only surprising, but also tragic. It appears that more entertainers have been dying again, including this past week. She just celebrated her birthday on January 4th. Over 1 month later, she's dead.

I don't know about anyone else, but it seems like the year of 2016 will be worse than the last several years. I really dread what this year has in store for us all. This year got off to a brutal start with famous people, most notably musicians dropping like flies.

As I was saying, Prince's former protege, Vanity died from Renal Failure on February 15, 2016. It's great that Prince hasn't died yet. My uncle would most likely go postal over him dying. Prince has always been more of an idol to him than Jimi Hendrix.

Even though my uncle loves them both, he still favors Prince over Hendrix.

More than 3 decades later, I still believe that having a purple parakeet named Vanity is strange because Prince was about purple. He has an album called Purple Rain, for an example.

When my youngest aunt and I had our 2 parakeets, I was only a pre-schooler. She claims that my parakeet (Vanity) literally pecked her parakeet (Prince) to death. Supposedly, Vanity pecked out all Prince's feathers and gave him a disease. Talk about a vicious bird.

Other than having 2 parakeets named after Prince and Vanity, I was NOT a huge fan of their songs. Growing up during the 1980's, I listened to more Pop Music and Glam Metal. My mother did NOT allow me to listen ANY Rap Music. Regardless, I always listened to whatever I wanted to growing up.

Earlier this week, I learned some interesting tidbits about Vanity. For example, I had no idea that Vanity and Nikki Sixx from Motley Crue were engaged to each other in 1986. On YouTube, I stumbled upon an old interview with Arsenio Hall interviewing Vanity.

Watching the way that man salivated over Vanity repulsed me to NO END.

Growing up, my grandmother always ranted about how much she could NOT stand Arsenio Hall. My grandmother normally referred to him as being a "lowlife." After watching his interview with Vanity as a 33 going on 34-year-old woman, I have to agree with her. Arsenio reminds me of those sleazebags from the street.

Meanwhile, I was annoyed watching Vanity act like a bimbo on stage. Not to speak ill of the dead, but she was literally a bimbo on crack or a "crack whore." Vanity used so much crack throughout the 1980's, that she and Nikki Sixx broke off their engagement in 1987.

By 1994, Vanity overdosed on crack and nearly died from Renal Failure. Because of the large amounts of cocaine she used throughout the decades, she began having kidney problems and had to go through a Peritoneal Dialysis 5 times a day.

After surviving a cocaine overdose in '94, Vanity chose to become a "Born Again Christian" and went into Evangelism. In 1995, MTV aired an '80s special.

The network was reflecting on music videos and groups from the 1980's, along with giving news updates about past '80s musicians and VJ's. Vanity explained in an MTV interview about her drug addiction, as well as how she became "saved" and an evangelist.

In addition, she began blaming Prince for her cocaine problems. As a 13-year-old girl at the time, I couldn't help rolling my eyes at Vanity's interview.

Unless Prince physically forced Vanity down and made her use cocaine, or slipped it in her drinks, he is not at fault. She chose to become a drug addict. Don't get me wrong. I think it's wonderful that Vanity quit using drugs and changed her life for the better.

All the while, Vanity acting self-righteous and blaming Prince for being a crack whore was and continues to be bullshit. I completely empathize with her wanting to change her life for the better and leaving her scandalous past behind.

In spite of Vanity's past as being a "Nasty Girl," she really needed to take ownership for her dumb choices. Hopefully, the woman did before dying.

Before I forget, I learned something else about Vanity, that I found to be interesting. Like a few other singers in the past including the late David Bowie, Vanity did a cover of the old Nat King Cole song, "Nature Boy."

In 1989, Vanity made her cameo appearance on Friday The 13th: The Series as a Pop singer named, Angelica. It was on Season 2: Episode 20 titled, "The Secret Agenda of Mesmer's Bauble." In that same episode, it featured Vanity's cover of Nat King Cole's "Nature Boy."

Some may be assuming that I am half-assing today's blog. I really hope this is NOT the case. This has been quite a rough week and I almost didn't publish ANY Song Saturday blog for today.

Rather than doing an entire block of Vanity songs, I thought I would share this extremely rare cover of Vanity singing "Nature Boy" for today's Song Saturday.