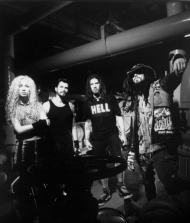 How's it going my gumdrops? On Thursday night, someone on Adult Swim posted a thread about liking 1 of Rob Zombie's newest songs. It's called, "In the Age of the Consecrated Vampire We All Get High." I told the poster, that I still enjoy White Zombie better than Rob Zombie's more recent work as a soloist.

Over the last decade or so, I really haven't cared for Rob Zombie as much as I used to, since the 1990's. When Rob formed White Zombie years ago, he seemed more focused on writing music, that did NOT sound as commercialized as his latest songs. Also, he directed every White Zombie music video.

After Rob Zombie started his solo career, his music became more commercialized and he began spending more time as a Horror "filmmaker." I always knew he was a Horror fan. It was the main reason why I gravitated towards White Zombie's music.

Now that the Horror genre has become more acceptable, glamorized, and "trendy" compared to it always being demonized and notorious, throughout the last several decades, I feel more apathetic. Today almost everyone is suddenly a Horror fan, writes Horror books, films, music, etc. It's mostly to turn a profit.

Don't get me wrong. I am by no means at all saying, that we should boycott Horror. If anything, it feels like suddenly everyone wants to jump on the bandwagon of liking the Horror genre.

You're probably saying to yourselves, "Well, you already knew Rob Zombie was a Horror fan and you liked him years ago. What has changed?"

In general, I believe that Rob Zombie is spreading himself too thin with his need to always create Horror films whether they are his own or REMAKING old films, which did NOT need to be remade from decades ago. Also, I feel that Rob has somewhat "sold out."

Between 1999-2000, Rob Zombie and his younger brother, Spider One from Powerman 5000 hosted an MTV special together. At that time, Powerman 5000 and Rob Zombie's music were really popular. I remember Spider being a fan of Rap Music, whereas Rob was NEVER a fan of the genre.

A little over a decade ago, I regularly exchanged albums with someone, who was interested in dating me; When we were college students, we burned CD's into our laptops.

While listening to Rob Zombie's album Past, Present & Future, I discovered that he collaborated with not only Lionel Richie from The Commodores, but also with the raunch feminist rapper, Trina. They covered The Commodores "Brick House."

Then again, he always loved having bimbos at his side. That's something else, that really began to annoy me as I became older.

When Rob Zombie's band, White Zombie existed years ago, he dated his, bassist Sean Yseult. Sean or Shauna did NOT act like a bimbo. Meanwhile, Rob's wife Sheri Moon Zombie acts like a bimbo every time I see her in his music videos and movies.

Sheri Moon Zombie might be a nice woman outside of entertainment, but she reminds me of when Vanity used to act like a bimbo before she got "saved." This is besides the fact, that Rob Zombie needs her in every music video and Horror movie he makes for fap material.

In Rob Zombie's latest music video, "Well, Everybody's Fucking In A U.F.O." Sheri Moon Zombie is in it as fap material. I've always known that Rob was perverted and created pornographic content. All the while, I fail to understand how he can stand having his wife act like an airheaded slut in EVERY music video and film he creates.

Rob Zombie must have The Brian Griffin Syndrome.

The more I really think about it, the more I realize and understand why that guy, who pursued me, always called Sheri Moon a "stupid whore." I do NOT necessarily believe, that Sheri is a stupid whore. Although, she acts like a stupid whore every time I see her on the screen and her own husband thinks it's acceptable to objectify her.

BTW: I am NOT some hardcore feminazi. If anything, I am beyond tired of constantly staring at certain women depicting every woman like we are all dumb sluts with no self-respect and continuously having to deal with self-entitled sleazebags, that expect to get laid 24/7.

Those are my thoughts, for now. Anyway, here are some more obscure songs and music videos from Rob Zombie's old band, White Zombie for today's Song Saturday.

I can still remember the Astro Creep 2000 album that had the electric head and some other tracks that I used to listen to. It also had that track called more human than human that got played on that Jim Carrey movie: The Cable Guy

Some of these White Zombie songs I shared today have been featured on soundtracks.