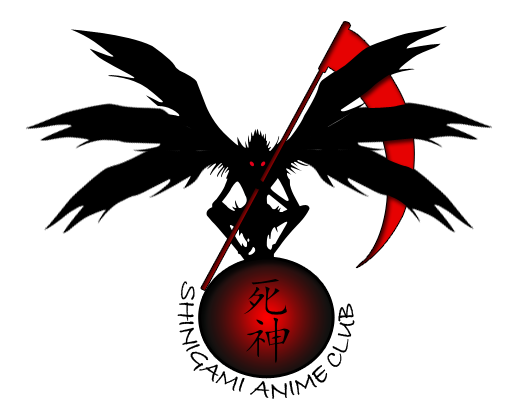 How's it going my gumdrops? What a busy and extremely overwhelming week this has been! This is another long overdue topic that I have been meaning to discusss dating all the way back to the middle of May.

You may recall that I was extremely busy during that time, especially when I was in the middle of family emergencies, scheduling my interview with Sean Yseult from White Zombie, having to plan my birthday with friends in June, etc.

In Japanese, Shinigami [死神] is translated as "death god." "Shini" [死] means die and "kami" and "gami" can also mean god [神]. It really all depends on which Kanji is used because "kami" means paper [紙], hair [髪], and god [神] in Japanese.

Everyone has seen this personification of death as a skeleton wearing a black-hooded cloak, while holding a large scythe. People fear The Grim Reaper because they know, that he is coming to take their lives. Some will fight him for their lives, if they don't fret over death.

In fact, it was not until the 18th and 19th Centuries (better known as The Edo Period), that these death gods became a part of the Japanese folklore. This is according to Ancient-Origins.

By the time of The Edo Period, Japan already became more exposed to Christianity. Buddhism, Shintoism, and Taoism are Japan's central religions. The last time I did research 10 years ago, only 1% of Japan was Christian. This same percentage still holds true in 2016.

Because the Japanese had interacted with more Westerners and because they became more exposed to Christianity and Western cultures, Japan borrowed and adapted our Grim Reaper into being gods of death in their own culture and various religions.

I would like to emphasize that Japanese people have not been conditioned to fear death the way we do.

There is only 1 Grim Reaper in our cultures, which must be feared whereas there are at least several pairs of death gods and they work in teams. Also, Shinigami do NOT have control over when someone is suppose to die. They ensure the right time of a person's death as opposed to taking someone's life, unlike The Grim Reaper.

I reiterate that Japanese people are more accepting of death compared to the rest of us because they believe more in the life cycle.

However, Shinigami have been depicted differently over the centuries in both Classic Japanese Literature and in today's Anime and Manga.

In 1841, the Japanese artist Takehara Shunsen published a picture book titled Ehon Hyaku Monogatari ("Picture Book of a Hundred Stories"). In that same picture book was a story called "Shinigami." 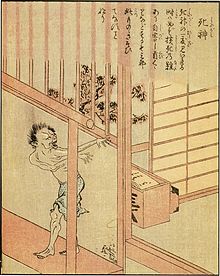 Ehon Hyaku Monogatari was meant to be a followup to Toriyama Sekien's Gazu Hyakki Yakō series. Shunsen's picture book was very similar to the Supernatural bestiary, that Sekien published. Those bestiaries consisted of illustrations of yokai.

Nearly a decade later during The Edo Period, Miyoshi Shōzan wrote an essay called "Shōzan Chomon Kishū." In the essay, Shōzan explained a story about a prostitute being possessed by a Shinigami, who invited a man to commit double suicide.

All the while, I have watched at least several Anime depicting Shinigami differently, throughout these last 10 years. Shinigami can mostly be seen in Shonen Anime.

I have watched them in Shonen, Shojo, Shonen Ai, and Seinen Anime such as Bleach, Death Note, Full Moon o Sagashite, the Naruto franchise, Soul Eater, Black Butler, and Descendants Of Darkness. These are only naming a few.

There are others, which depict Shinigami differently. At least 5 of these shows have been aired on Cartoon Network, Adult Swim, Chiller TV, and Syfy within the last 10 years.

I have yet to see Full Moon o Sagashite or "Searching for the Full Moon" on any cable or satellite channel. Considering it is a Shojo Anime, the chances of Cartoon Network or Adult Swim airing it is highly unlikely. Both Cartoon Network and Adult Swim are run by closet misogynists and continue to alienate their audience in general.

Forcing Cartoon Network to air cartoons for girls again and firing Stuart Snyder partially solved the viewers' problems. (The discussion of Cartoon Network and Adult Swim's misogyny will have to be saved for another blog.)

I believe Descendants Of Darkness was aired on Syfy and Chiller TV mostly because NBC Universal's networks were NOT afraid to take a risk of airing a Shonen Ai Horror Supernatural Anime.

As I was saying, I watched a little of Full Moon online years ago. Maybe someday I will have a chance to sit and watch the entire series.

If you have NOT noticed, there is an image of a Shinigami in monster form, at the top of this blog.

That is an image of Ryuk from the Shonen Occult Psychological Thriller Anime, Death Note. You cannot see Ryuk's face at the top of today's blog because he is in the dark with his glowing red eyes.

I would've shared more images of the various depictions of Shinigami, but the images would've been huge. Although, I DID manage to find a YouTube video that somebody uploaded. The video is a quick list of The Best Shinigami Anime Of All Time.

In the following video, you will be able to see all the depictions of Shinigami in different Anime: