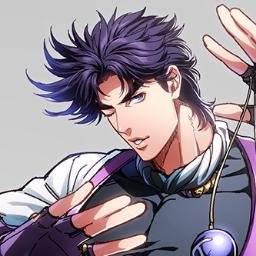 {This Cartoon Sunday blog was previously published in 2017. As of 2020, videos containing the following music references have recently been updated.}

How's it going my gumdrops? Did you enjoy the last Cartoon Sunday blog I published on Thursday? In case you missed that delayed blog, you can read it HERE. Hopefully, more Gen X Horror and '80s Metal fans enjoyed yesterday's Song Saturday blog about Dokken.

Speaking of the 1980's, more musicians were name dropped in last night's episode of JoJo's Bizarre Adventure: Battle Tendency. Lately, more musicians from the '80s are being referenced to in Part 2 of this series. Hirohiko Araki's characters are named after many groups (mostly Rock bands) and singers in general.

JoJo's Bizarre Adventure: Phantom Blood was only Part 1 of this franchise. Part 1 took place during the 19th Century in England, when Jonathan Joestar was learning how to use Hamon.

Hamon is supposedly a form of Martial Arts, which uses the sun's energy.

Will A. Zeppeli taught Jonathan how to use Hamon to fight his sinister, adopted brother, Dio Brando and Dio's minions of vampires. Part 2 is Battle Tendency.

The first 2 parts of the series are combined into Season 1 of the JoJo's Bizarre Adventure franchise.

Now that JoJo's Bizarre Adventure: Battle Tendency is airing on Adult Swim's Toonami block, the franchise takes place, during the 1930's with Jonathan Joestar's grandson, Joseph Joestar (in the picture above) in America. Lately, there have been a lot of 1980's singers being named dropped.

Last week, the character "Lisa Lisa" was introduced. There was also a song sample of Yes' "Owner Of A Lonely Heart" being used, when Joseph was doing Hamon training.

In Battle Tendency, Joseph Joestar trains to defeat The Pillar Men. The Pillar Men are members of an ancient vampiric race. Last night, he managed to defeat Esidisi. Esidisi is named after the Hard Rock band, AC/DC.

Watching JoJo's Bizarre Adventure is quite an entertaining franchse for a Shonen Supernatural Thriller Action Anime. The illustrations of these characters look like dated characters from the 1980's.

Then again, Hirohiko Araki created his Manga during the 1980's, which explains why some of his characters are named after Lisa Lisa, Wham!, REO Speedwagon, Dire Straits, The Cars, etc.

Every time a musician is name dropped in this series, I start laughing. Rather than sharing the usual animation, I thought it would be better to learn more about the names of the characters from the JoJo's Bizarre Adventure franchise for Cartoon Sunday.

Suddenly, I have Led Zeppelin's "Immigrant Song" stuck in my head.