Song Saturday: Dokken's Back For The Attack 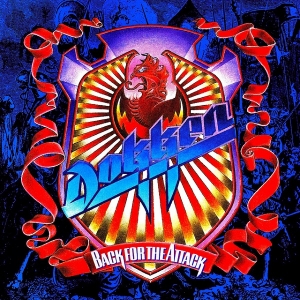 How's it going my gumdrops? As you already know, or should know, I'm back this week for Song Saturday and Cartoon Sunday. In case you missed the previous blog, I briefly explained what happened 2 weeks ago.

Originally, I planned to publish this blog last Saturday. February 10th was the 30th anniversary for Dokken's release of their single "Dream Warriors." "Dream Warriors" was not only written and used as A Nightmare On Elm Street 3: Dream Warriors' theme song, but can also be found on Dokken's 4th album, Back For The Attack.

I remember the band's music video for "Dream Warriors" being heavily played on MTV. My mother would usually change the channel so that I wouldn't get scared of Freddy Krueger in the music video.

Most people don't know, that some of today's Hollywood A-List actors and actresses made their film debuts in Slasher Horror films. Johnny Depp made his film debut in the original A Nightmare On Elm Street for example. Watching Freddy Krueger pull the character, Glen through the bed only to slash Glen to pieces saddens me, until this day. Poor Glen.

Another A-Lister, who debuted in a Slasher Horror film was Patricia Arquette. Patricia debuted in A Nightmare On Elm Street 3: Dream Warriors.

She also made her cameo appearance in Dokken's music video for "Dream Warriors." Dokken used movie clips for their music video, along with filming their own original video scenes. The actress' character, Kristen ends up being rescued by Dokken from Freddy by the band performing the sequel's theme song, "Dream Warriors."

At the end of their music video, Freddy wakes up from his "nightmare" about Dokken. When you watch the music video, you have to laugh at how silly it looks. Luckily, the music video was MUCH better than the film. Dokken was heavily advertised for A Nghtmare On Elm Street 3.

About 10 minutes into the movie, the character Taryn was shown in the hallway wearing a Dokken T-shirt.

Even though A Nightmare On Elm Street 3: Dream Warriors heavily advertised Dokken and gave the band more commercial success, this Slasher was a joke. Giving mentally disturbed teenagers special powers to fight Freddy Krueger in their dreams felt TOO contrived. Yes, I know the movie is called "Dream Warriors" for a reason.

However, that movie is as God-awful as Sharknado and other movies, which are currently airing on Syfy. I tried watching Dream Warriors years ago and ended up turning it off because I couldn't take it seriously at all. It was LAME.

Have you ever noticed that the original A Nightmare On Elm Street (excluding the 2010 remake) still gets aired on cable whereas the sequels usually don't?

After watching MTV Classic, I realized a number of Dokken's songs consisted of topics regarding love, relationships, fear, etc. accompanied by some Horror in their music videos. Judging by this Metal band's music videos, album covers, and instruments, I assume they are Horror fans.

If not everyone from Dokken, at least a small percentage of them may be Horror fans. Throughout the years, guitarist George Lynch had skulls, bones, snakes, and demons designed on his guitars.

Also, I want to add that the success of Dokken's "Dream Warriors" for A Nightmare On Elm Street 3: Dream Warriors led to the following sequels to include a Heavy Metal song on its soundtrack.

Those of you reading today's blog are probably wondering about my favorite songs from Dokken. Right now, I have their song "Breaking The Chains" stuck in my head, which is on their 1981 debut album, Breaking The Chains.

As for Dokken's Back For The Attack album, my mother bought me that album when I was a little girl. I've had it on vinyl for nearly 30 years. Although, I haven't played the album on my turntable in 17 years. Decades later, "Heaven Sent" is still my favorite from Back For The Attack.

I believe Dokken is 1 of the most HIGHLY UNDERRATED Metal bands from the 1980's. Not that I hated listening to Glam Metal bands, during my early childhood in the '80s, but there were other Metal bands, that did NOT get the amount of praise as they should've.

Dokken was NOT a flamboyant, cross dressing, '80s Metal band, that female fans and groupies flocked over.

Anyway, to celebrate the 30th anniversary of the Back For The Attack album, here are 3 music videos by Dokken for Song Saturday.