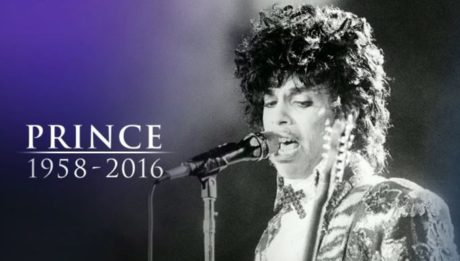 How's it going my gumdrops? Looks like Prince and his friend, Charlie Murphy will have to roll their corpses over to make room for Cuba Gooding Sr. Yesterday Cuba Gooding Sr, who was the lead singer of The Main Ingredient and father of Cuba Gooding Jr, died at the age of 72.

Now, our so-called "Purpleness" and Cuba Gooding Sr. share April 21st as the day they both died. Here it is 1 year and 1 day later, since the death of Prince.

Can you BELIEVE it has been an entire year, already? I can't. This could be because of the media's non-stop coverage about Prince's death, since last April 21st. MTV Classic actually did a Prince Video Tribute Block yesterday.

Also, fans from all over the world came to America, in order to visit Prince's Paisley Park in tribute to him. Even though 2016 had an outrageous death toll, Prince still remains in the media because he is ANOTHER dead music icon.

Because YouTube stripped and muted ALL his music videos, I more recently had to update my last Prince tribute blog. What was the point of muting Prince's music videos?

If YouTube did NOT want anyone watching his music videos because of sudden copyright issues with Warner Bros, it would've been more logical to remove them.

Since the music videos I shared in my last Prince Tribute blog were muted, I went to another media player site and linked them in that same Song Saturday Tribute blog. Therefore, when you click on last year's blog below, you must click on each music video link I numbered.

Speaking of last year, I watched ABC's 20/20 Special about Prince and discovered, that he wrote a plethora of songs. There were songs Prince wrote specifically for himself, that other singers eventually covered.

Meanwhile, some songs were written for other singers. That was unless those singers wanted Prince to co-write their lyrics with them. However, some of the songs he wrote were under pseudonyms.

To give some examples, Prince went under the pseudonyms "Jamie Starr" and "The Starr Company," when he wrote for other singers during 1981-1984. When writing songs for Sheena Easton and Kenny Rogers, he used "Joey Coco." Not only "Joey Coco," but also "Alexander Nevermind" for Sheena Easton's song "Sugar Walls."

Thank God Apollonia 6 never used "Manic Monday." I heard their demo of the song and it SUCKS. Listening to Apollonia 6's demo of "Manic Monday" felt like I was listening to 3 abused kittens being punished to sing. That was probably why Prince held onto the song for 2 years.

Luckily, "Manic Monday" became The Bangles' song, 2 years later. Rumor has it that somebody from the Pop-Rock band had to sleep with Prince most specifically, The Bangles' rhythm guitarist, Susanna Hoffs, in order to acquire the song.

Tevin Campbell debuted with "Round and Round," which was another song written by Prince. I don't think he used a pseudonym for that song, since he was featured in the music video and the background vocals.

There have been so many songs "The Purple One" wrote, throughout the decades, that I could be here forever listing them. Rather than doing so, here are a few sources you can read about Prince and his many pseudonyms for songs he wrote and co-wrote.

The Definitive Ranking Of Prince’s Many Aliases

LA Times: The many names of Prince

The Grio: Prince’s many names (even more than you thought)

Everybody should keep in mind, this is another Prince Tribute blog. This is NOT an excuse for some (typically narrow-minded, Baby Boomer men) to be rude and nit pick about something not being "THEIR genre(s) of music" much like the obnoxious Baby Boomers from Blogster. They are actually the main reason why some of my subscribers and I left.

We all know that I am a complainer. At the same time, the bloggers on Blogster were too insufferable for us to tolerate. Anyway, here are some of the songs Prince wrote and co-wrote for today's Song Saturday.

Reply xXARKILLERXx
11:23 AM on April 22, 2017
Nice compilation of songs . Informative article as always

Reply zombie
3:34 PM on April 24, 2017
I wasn't as big a fan as a lot of people , but his eccentricity was just interesting enough and a few songs were good. He will be missed.

Reply Anna H.
5:21 PM on April 24, 2017
Zombie I was amazed to learn about a lot of songs, that Prince wrote and co-wrote throughout the decades. Now that Prince is dead, I realize that there are more songs that I liked from him.