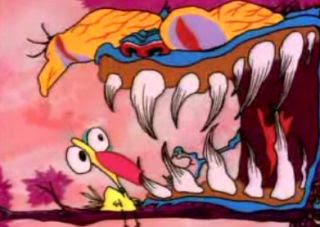 How's it going my gumdrops? Did you enjoy yesterday's Song Saturday Tribute to the late Chester Bennington of Linkin Park and Stone Temple Pilots? If so, let me know.

Also, let me know if you would like for me to do a Q&A blog at least once a week. I am already getting ready to answer 1 question. Hopefully, I'll be able to publish my next Q&A blog for this week.

On another note, I am sharing something a little different from the usual for this Cartoon Sunday. How many of you are familiar with John R. Dilworth? The actor, writer, director, animator, and producer is also known as "Dilly."

In fact, I remember channel surfing and stumbling upon Courage The Cowardly Dog on Nickelodeon, when I was in 6th grade. That was more than 20 years ago. Quite a few shows meant for children, which started airing on Cartoon Network WERE originally from Nickelodeon.

The TV series based off R.L. Stine's anthologies for Goosebumps aired on Nickelodeon, before Cartoon Network acquired it, is another example.

I remember Courage The Cowardly Dog airing on Nickelodeon years before Cartoon Network acquired it. Even though I was never a fan of the cartoon during my youth, there will be some fanboys 1 generation younger than yours truly, discrediting me about something they were not old enough to comprehend, much less watch.

Unlike younger Millennials and Generation Z, Cartoon Network, Nickelodeon, Disney, etc. were NOT a part of my childhood or adolescence. I grew up watching Saturday Morning Cartoons and cartoons that aired on local channels everyday.

By 1992, I had already reached puberty and started watching the Liquid Television Animation block on MTV and Anime on The Sci Fi Channel in 1994.

MTV and Sci Fi had more mature content in their animation, that I wanted to watch whereas Cartoon Network and other networks showed more immature cartoons for pre-schoolers, kindergarteners, and elementary school children.

Some of you already know about me watching the Liquid Television Animation block. Beavis and Butt-Head, Daria, The Maxx, The Head, Celebrity Deathmatch, Aeon Flux, etc. were popular, during my adolescence.

The Cartoon Sushi block succeeded Liquid Television by 1997 on MTV. During the mid to late 1990's and early 2000's, I was an adolescent, when MTV aired these cartoons. This was years before Adult Swim was ever launched.

By 1997, the local networks had replaced cartoons with Court TV and Daytime Talk Shows. These local networks assumed every household by that time had basic cable channels like Cartoon Network, Nickelodeon, Disney, etc.

Truth be told, every household did NOT have a basic cable package.

Because today's blog mostly focuses on MTV, the network's cartoon blocks, its cartoons from the 1990's, and briefly mentions John R. Dilworth's Courage The Cowardly Dog, it's only fair to share a cartoon, which briefly aired on MTV.

Have you ever watched John R. Dilworth's The Dirdy Birdy?

The Dirdy Birdy was a 7-minute animated short, which aired on MTV during the early 1990's. The short features a hostile cat (Fergurina) and the obnoxious bird (Purdy) sitting in a tree.

If you did NOT know any better, you would swear that Purdy was the equivalent of an online troll sexually harassing Fergurina. Purdy is in love with Fergurina and expresses his affection for her. The bird's affections consists of MOONING her. The Grim Reaper also makes his cameo appearance.

Talk about an obnoxious creep! No wonder why the cat turns into a monster. Never in all my years have I ever seen a bird moon a cat in a tree or a cat transform into such a ferocious monster. This is surely a sight to behold!

Rather than explaining every detail of this abstract short, which used to air on MTV, it is much better for you to independently watch it, right now. Anyway, here is John R. Dilworth's The Dirdy Birdy for today's Cartoon Sunday.