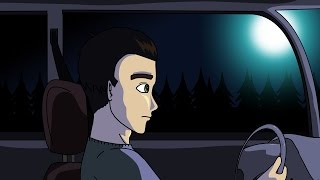 How's it going my gumdrops? How creepy was the theme song from The Amityville Horror Soundtrack, that I shared yesterday? If you ask yours truly, I feel haunted houses and paranormal activity are more terrifying than monsters, unless they are Gremlins.

We all know those cynics, who don't believe in ghosts or much of anything that can't be proven based on science. This may be difficult to believe, but science is NOT the answer to everything.

A few years ago, I started reminiscing about the Scooby-Doo franchise. In fact, I happened to be watching a Scooby-Doo TV series. As an adult, I realized just how incredibly cynical the overall franchise has been over the last 48 years.

Growing up as a little girl during the 1980's and '90s, I was annoyed by the cynicism. I understand, that CBS and Hanna-Barbera wanted to appease the parent watch groups, in order to prevent more protesting during the '60s, but they actually helped promote and validated cynicism.

I will even go as far as saying that CBS, Hanna-Barbera, and other companies caused the last 3-4 generations to grow up to be cynics, who have to disprove EVERYTHING, that doesn't fit their narrative about something being SCIENTIFICALLY PROVEN.

Do you remember Charles Riborg Mann and George Ransom Twiss' book Physics? In the 1910 book, they asked: "When a tree falls in a lonely forest, and no animal is near by to hear it, does it make a sound? Why?"

The question was supposed to be about physical point of view. However, I believe it was a question made to validate and promote other people's denial of something OR someone's existence with more cynicism. This can ESPECIALLY be said about those, who refuse to acknowledge supernatural and paranormal phenomena.

Let's use the Scooby-Doo franchise as an example. In the original cartoon from 1969, Scooby-Doo, Where Are You? Fred, Velma, and DAPHNE did NOT believe in ghosts and monsters. All 3 characters were ALWAYS validated by the end of each episode.

You may be saying, "Anna, you're overthinking this. It's only a cartoon." Scooby-Doo may be a cartoon, but it is a cartoon that has hidden messages in it. You really have to read between the lines so to say and pay close attention to the underlying messages.

You could argue that Hanna-Barbera did not want to scare children with supernatural and paranormal phenomena. At the same time, the characters and the writing in this cartoon appear as being cynical.

Anyone who believes in supernatural and paranormal phenomena are viewed as being crazy and delusional because cynics bought into George Berkeley's philosophical lies about "immaterialism."

Immaterialism in philosophy is basically the metaphysical denial of the existence of the material world. In other words, it's just your imagination; It's ALL in your head.

This next creepy story is another true pizza delivery story. It comes from YouTube's Mr. Nightmare. Mr. Nightmare's story was turned into an animation by Llama Arts.

In this paranormal story, Mr. Nightmare does his pizza delivery to a hidden house near the woods at night. Anyway, here is his true pizza delivery story for today's Cartoon Sunday. Let the cynicism begin!

Reply DJ Scott
4:52 AM on September 19, 2017
Ahh, I haven't heard immaterialim mentioned in decades. You know the opposite theory is also used to encourage materialistic cynics, Object Permanence. "Object permanence is the understanding that objects continue to exist even when they cannot be observed (seen, heard, touched, smelled or sensed in any way)." It comes from child psychology, and is misused by smug people that we're like children whose ball rolled behind the couch and we think it "disappeared." Therefore, there can't be a hidden, spiritual realm and life after death: that spiritual people are just babies with misplaced toys. BONK. How friggin' condescending and misogynistic. Process Philosophy easily disproves such egg-headed-ness.

Reply Anna H.
5:00 AM on September 19, 2017
People like that are so annoying. That's why nowadays, I realize there are certain topics you discuss with certain people. You will always have those cynics and skeptics, who are DETERMINED to prove something or someone wrong 24/7. It's like they intentionally look to prove someone wrong and call other people "liars."

Reply DJ Scott
5:04 AM on September 19, 2017
Even some brilliant scientists like Carl Sagan suffered from tunnel vision on spiritual matters. I loved his series "Cosmos" growing up, but the materialist undertow was depressing. Another English prof I studied with similarly blamed PBS via "Sesame Street's" Big Bird for the wave of self-entitled whiners that have taken over Generation Y.

Reply Anna H.
5:08 AM on September 19, 2017
Personally, I've always hated Sesame Street. As a child, I felt like my intelligence was being insulted by staring at some guy dressed up in a yellow bird costume lecturing me about education and whatnot. LOL!