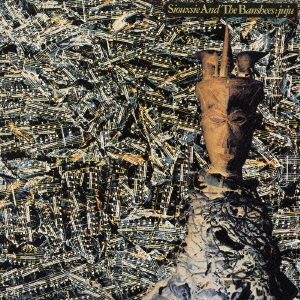 How's it going my gumdrops? Do you feel like you learned something from yesterday's blog in regards to trick-or-treating? I really hope so because there is a lot, that most of us didn't already know before I published that blog.

October will be over soon. Can you believe that Halloween is in ONLY 3 more days? This means the current background scenery will be gone until next September; The red floral scenery will return, next month.

At the beginning of this week, it was difficult trying to decide what to share for today. I could not choose between Siouxsie And The Banshees and Danzig's old Horror-Punk band, The Misfits. Both were Goth Rock bands with songs about the holiday, Halloween.

Songs from Siouxsie And The Banshees' 4th album, Juju work perfectly for Halloween. Juju was commercially successful in the United Kindgom, during 1981. The album has been viewed as a landmark album of the Post-Punk Rock genre.

In 2005, Siouxsie And The Banshees' 4th album, Juju was published in Universe Publishing's book, 1001 Albums You Must Hear Before You Die.

According to The Guardian in 2007, Juju ranked on the "1000 Albums To Hear Before You Die" List. The British daily newspaper reported, "Perennial masters of brooding suspense, the Banshees honed their trademark aloof art rock to its hardest and darkest pitch on Juju."

I must say, the songs on Juju can be dark. This can most definitely be said about the song, "Voodoo Dolly." "Voodoo Dolly" should've been a hit single from Juju, if you ask me.

It is surprising that "Voodoo Dolly" was NEVER released on a soundtrack. "Spellbound" and "Halloween" are 2 other songs, that you should add to your Halloween or Horror Music Playlists.

Although, I am highly biased to say that "Voodoo Dolly" should be on your playlist, before any other song from Siouxsie And The Banshees' Juju album.

"Voodoo Dolly" has a haunting, spooky, and ominous tone. This is especially when you listen to Siouxsie Sioux's vocals on that track.

Whenever listening to "Voodoo Dolly," I automatically expect a ghost from the graveyard to suddenly jump out and frighten someone, if not a scornful witch performing a curse on an enemy.

Get ready to be spellbound before Halloween with a Vooodoo Dolly for today's Song Saturday Block. There is a triple dose of songs from Siouxsie And The Banshees' 4th album, Juju.