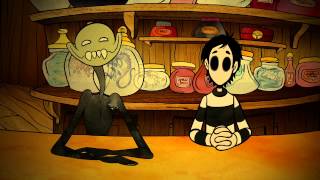 How's it going my gumdrops? Because we were celebrating my grandmother's 77th birthday, I published Song Saturday 2 days ago. Yesterday we celebrated her 77th birthday at Red Lobster for lunch. Hopefully, MORE people remembered to thank veterans for their services, while celebrating Veterans Day.

Aside from celebrating Veterans Day yesterday, it's Cartoon Sunday. This animated short I'm sharing with you today was a short I meant to share last Sunday. The Face Shop is a Dark Comedy Animated Short created by Noella Borie.

Originally, The Face Shop was Borie's thesis film meant for children in May 2010. It's about the 11-year-old boy, Neil who has no face. Neil's monster friend, Manny takes him to a face shop so that he can find himself a suitable face.

When I watched The Face Shop a few weeks ago, it reminded me of the 3D Stop-Motion Dark Fantasy Horror film, Coraline.

Even though Coraline and The Face Shop were meant for children, adults can be easily attracted to both. This is especially if you are a fellow Gothic Horror fan.

Not only did I notice that the illustrations for Noella Borie's The Face Shop looks very similar to Coraline, but it also looks abstract enough to pass as a potential animated short for Adult Swim.