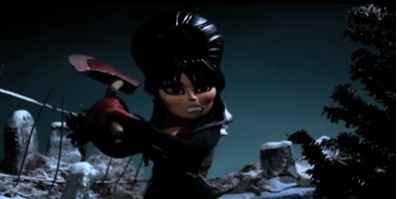 Merry Christmas Eve my gumdrops! In the Cartoon Sunday blog I published 2 weeks ago, I mentioned that Adult Swim's Toonami block would be airing a Cowboy Bebop Marathon, AGAIN.

While miserable cheapskates, ingrates, AND misanthropes poured their misery everywhere both on and offline about having to celebrate Christmas and other December holidays, I used my time wisely.

Because we did NOT want to do any major cooking and cleaning this Christmas, we wrote a list of what dinners to order from The Cheesecake Factory. The restaurant will be closed tomorrow because it will be Christmas Day. With that being said, we will be ordering and carrying out our dinners tonight so that we will have them for tomorrow.

Aside from planning what dinners to buy from The Cheesecake Factory, doing the usual chores, and me boycotting Toonami's Cowboy Bebop Marathon, I worked on today's Cartoon Sunday blog.

I cannot believe that TBS of all networks will be airing a brand new episode about the holidays ON a holiday. Most networks today air Christmas specials and movies 1 week or so before the actual holiday rather than on it. TBS deserves a gold star!

Speaking of animation and Christmas specials, did you know that in 2010, Elvira had an animated short for Christmas? Earlier this month, I discovered her animated short on YouTube. It's amazing what you find online.

Hopefully, my fellow Horror fans will enjoy it. I managed to stumbled upon a rare gem, that I never knew existed.

Elvira's Very Scary X-Mas is techically a Christmas Horror Stop-motion Animated Short. With the help of the creators of Killer Klowns From Outer Space, the animated short was featured on her show, Elvira's Movie Macabre.

If you are at least over the age of 30 and watched Horror films and shows during the 1980's, you should already know about Elvira and who she is. I don't expect younger adults and children to know about Elvira.

Even though the so-called "Mistress Of The Dark" is on social media sites like Twitter, chances are highly great that younger Millennials and Generation Z barely know much about her, if anything at all. Elvira was before their time.