Love Stinks When You're Single On Valentine's Day 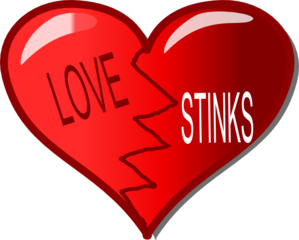 How's it going my gumdrops? I have not been as talkative online these last several days, especially yesterday.

Blog community hunting, dealing with advertisers and mainstream media cramming Valentine's Day down my throat, and getting into a fight with a friend don't seem to mesh very well.

Because of what I said previously, I was on an emotional rollercoaster yesterday. However, what really sent me over the edge was Valentine's Day.

Not that I didn't get any presents for Valentine's Day because I got several.

I got a new lounge pants set, chocolate candy, an extra pair of lounge pants with snowflakes, hearts, and skulls on them (which I am currently wearing), and food from Taco Bell.

After being told that my favorite Taco Bell Burrito (The Volcano Burrito) was discontinued, I was a little upset.

Since my family spent a lot of time and money trying to make Valentine's Day special for me, I didn't want to complain. There wasn't enough money to buy them anything for Valentine's Day.

Nonetheless, I did and I shared my cupcakes with my family. Because they spent so much time and money on me yesterday, I just washed the dishes.

After signing back into stalkbook last night, I was in a bad mood again. I had to sit and look at some of my friends' wedding pictures, their "I love my husband/wife/girlfriend/boyfriend" statuses, obnoxious Valentine's Day articles, advertisements, etc.

You are probably thinking, "So what? If you don't like it, don't look" or something along those lines. This Valentine's Day week has been on my last nerve. I mostly blame our local TV stations and commercials.

Our local news reporters kept reporting about Valentine's Day and couples, which didn't help any. They BARELY acknowledged how infuriating it is to us singles and people, who are only dating or in a so-called "committed relationship," that can't celebrate with their significant others, or have no one.

If I have to listen to or read that same bullshit spin about "Valentine's Day is just a Hallmark Holiday. Why celebrate love once a year, when couples should celebrate their relationships everyday?", I'm gonna bitchslap somebody!

Whether we are in relationships or NOT, we are forced to be shown and told about how great so-and-so's man is to her because he bought her this and that, showed he does listen to a single word she says by doing something romantic and creative, etc.

It's not that Valentine's Day is necessarily a woman's Show & Tell Holiday because men are given presents as well.

Japanese females either buy chocolate candy, or custom make it for whoever they have a crush on and give them chocolate candy as Valentine's Day presents.

Females also give their female friends "obligatory chocolate." If you have ever watched Anime, you'll understand what I'm saying.

Then, March 14th is White Day. White Day is the female version of Valentine's Day.

Regardless, singles and couples celebrate Valentine's Day. Japan is only celebrating it differently than other countries.

As an American woman, I take Valentine's Day personally. It's mostly because I'm constantly having to deal with people intentionally pouring salt into my wounds.

The last guy I dated was 8 years ago. My last ex-boyfriend was a womanizing crooked cop. He committed hate crimes, loved playing highly offensive and deplorable pranks on people, and was a cheapskate.

I was matchmade to be with that loser all because my oversexed friend's boyfriend at the time, planned our blind date. I dated him for 3 months. He had no respect for me and other people, along with being inconsiderate, when I was on my sickbed.

Instead of him buying me anything for Valentine's Day, he was supposedly "working late." Then, 2 months after I dumped him, he told me about how he knocked up his fuck buddy, shacked up with her, and got married. I bitched him out.

Valentine's Day 2007, he felt the need to e-mail me and 3 other women his new born daughter's baby pictures. I ended up sending him another angry message and blocked his ass.

I would've dumped that asshole sooner in 2006, but my highly oversexed friend kept begging me to give him another chance.

My crooked cop ex and several other exes are the driving forces behind me writing "All Of Chastity's Men." How's that for an Anti-Valentine's Day Story? There really should be more of them.