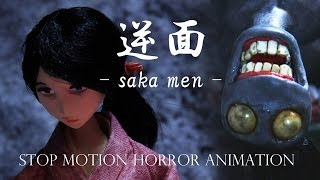 Also, if you would like to catch up on previous blogs, check out my blog list right here.

Meanwhile, I have spent HOURS from last night throughout earlier this morning online hunting around for more entertaining animation to share with everyone. You might be wondering why I did not reshare that previous Cartoon Sunday blog about Beetlejuice today. The thought did cross my mind yesterday, but I wanted to share something a little different.

In fact, I originally meant to share this Japanese Stop Motion Horror Short on It's Not All Gumdrops & Unicorns months ago. I'm starting to think that some of the content I meant to share over this spring and summer is more fitting for October.

Today we have Shigeru Okada's short, Saka Men. Okada is a Japanese writer, director, and animator. His Stop Motion Horror Short, that I am sharing with you today centers around the Shimenawa in the Japanese religion, Shintoism.

It has been ~10-12 years, since I last conducted research on Shintoism for Asian Studies. I mostly focused on the Sun Goddess, Amaterasu. As I was saying, the Shimenawa is a special plaited rope, which is tied around trees. Shimenawa is normally tied around trees in Japan, in order to ward off evil spirits.

In this short, after a man gets into a knife fight with a monk on the mountain, he cuts the shimenawa rope to wrap around his arm. His wife tries to warn him not to cut the shimenawa but he chooses to be defiant. Because he disobeyed his wife, an evil spirit possesses his body. Then, it devours he and his wife.

To warn you in advance, Saka Men is in Japanese. You can watch this short in English subtitles. In order to really get the feel of Saka Men, I highly suggest clicking on the video below and watching it directly on YouTube. That way, you can maximize your screen. Anyway, here is Shigeru Okada's Saka Men for today's Cartoon Sunday.

Reply xXARKILLERXx
8:32 AM on May 3, 2017
Woahh!! Now that's an interesting article. I would like to know more about these customs and burial rituals