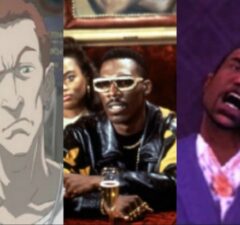 How's it going my gumdrops? Since tomorrow is Easter, I thought I would share this Cartoon Sunday blog 1 day in advance. JoJo's Bizarre Adventure's season finale airs tonight at midnight on Adult Swim's Toonami block.

While Toonami tards nit pick, whine, and fixate on every show's ratings, viewers like yours truly happen to be enjoying other Seinen Action Anime such as JoJo's Bizarre Adventure and Tokyo Ghoul. These are NOT the stereotypical Toonami Anime.

I was originally going to make today's blog about the JoJo's Bizarre Adventure franchise. That was until I learned about the death of Charlie Murphy, last Wednesday.

As I said earlier, Charlie's death was shocking and sad. I will never forget meeting him in my original dorm's lobby at Carthage College 12 1/2 years ago. I had the chance to meet Charlie Murphy, before he and the cast of Chappelle Show did their stand-up comedy routines.

The cast of Chappelle Show was doing their comedy tour in tribute to Rick James. Luckily, they visited us at Carthage College that year.

This happened during the time, when my family was forced to attend and partake in my uncle's wedding and my grandfather was terminally ill. On September 10, 2004, I had just moved back into the dorms for the fall term at Carthage College.

I was broke and my cell phone was shut off, at the time. Therefore, I had to use my previous dorm's pay phone in the lobby. (Yes, pay phones still existed in 2004 but they were fastly becoming obsolete.)

As I was talking to my youngest aunt via pay phone, Charlie Murphy jogged passed me, saying, "Hey! How's it going?" I ended up doing a double take and was "star struck."

You may be wondering WHY I am explaining this to you. Those who did NOT already know, Charlie Murphy voiced the character, Ed Wuncler III on Adult Swim's cartoon, The Boondocks.

The character Ed Wuncler III was an affluent, white, Iraqi war vet and a domestic gangster with the so-called "blackcent."

The Boondocks: Ed Wuncler III Explains About His War Experience In Iraq (2005)

The Boondocks "The Absence Of Evidence Is Not The Evidence Of Absence!" Scene (2005)

Wearing that "W" medallion, Ed Wuncler III could be viewed as the parody of a young President George W. Bush combined with the characteristics of the rapper, Eminem. "Ed" somewhat reminded me of a white version of the rapper, 50 Cent because he wore medallions. Also, I always associated the "W" to stand for Wuncler and war.

Some of my favorite scenes from The Boondocks usually consisted of Ed and Gin Rummy committing crimes together. Not that I condone and glorify the criminal lifestyle, but watching it in a Black Animated Sitcom meant for sociological and political satire is hilarious.

In tribute to the late Charlie Murphy, here are scenes of he and Samuel L. Jackson voicing their characters, Ed Wuncler III and Gin Rummy. In the episode, "Thank You for Not Snitching," Ed and Gin discuss the stupidity of cell phone technology, while invading people's homes.

Reply xXARKILLERXx
2:23 PM on April 15, 2017
Informative article as always the description for W was epic white version of 50cent was catchy. Keep up the good work .

Reply Anna H.
2:39 PM on April 15, 2017
Zombie I'll definitely have to check it out sometime. Charlie Murphy should've gotten more publicity early on in his career. It took for Chappelle Show to give him exposure as a comedian.

Reply Victor
5:07 PM on April 16, 2017
It's gonna be very sad seeing Black Jesus again and forgetting that Charlie Murphy is dead and unlikely that a season 3 would happen if they write him off as dead.

Victor says...
It's gonna be very sad seeing Black Jesus again and forgetting that Charlie Murphy is dead and unlikely that a season 3 would happen if they write him off as dead.

But it is very interesting nonetheless!

Reply Anna H.
8:11 PM on April 16, 2017
Victor, I never watched Black Jesus. I forgot about the show, since Adult Swim's programming changed A LOT over these 9 years. I mostly watch Adult Swim for certain weekend shows.

Anna H. says...
Victor, I never watched Black Jesus. I forgot about the show, since Adult Swim's programming changed A LOT over these 9 years. I mostly watch Adult Swim for certain weekend shows.

I still miss that guy.

Reply Anna H.
12:42 AM on April 17, 2017
Yeah, I know what you mean. Another funny and talented entertainer, that is dead and gone. Hopefully, Charlie Murphy is reunited with Rick James and Prince playing basketball together.