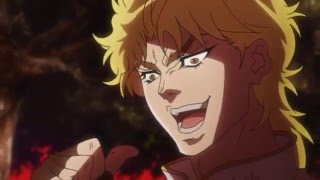 How's it going my gumdrops? As usual, things have been crazy over these last 24 hours to 2 weeks, if not more both on and offline. This is not including April being birthday season for my family. Therefore, I never know how the day is going to be from 1 day to the next.

Hopefully, I will be able to "break the news" to everyone about a cool social media site, that I joined last month. Before I forget, I also joined Twitter last week. You can find me HERE. My Twitter profile can also be found on the Links page.

I must admit that I am automatically biased to watch JoJo's Bizarre Adventure: Stardust Crusaders. It gives me a reason to listen to The Bangles' "Walk Like An Egyptian" as the show's ending theme song. Talk about '80s nostalgia.

There are at least 4 of these countdowns made about Anime villains. Some are repeats for each type of villain.

By the looks of it, Watch Mojo tends to favor Death Note's Light Yagami as a major villain. Even though Light was a villain, Dio Brando should've made the countdowns just as much, if not more than him.

Dio is as deplorable of a character as Light was because Dio was evil from the very beginning of JoJo's Bizarre Adventure. Light on the other hand, became evil after obtaining notebooks from Shinigami.

Light Yagami originally had good intentions in the beginning but gradually developed a serious God Complex and let the power of executing criminals overtake him. After watching these 4 Watch Mojo Top Anime Villains countdowns for today's Cartoon Sunday, you be the judge.

Reply Anna H.
5:20 PM on April 9, 2017
Thanks! I am glad​ you enjoyed today's Cartoon Sunday blog. People can learn a lot just from watching these countdowns.😊